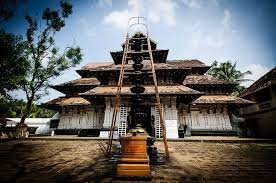 Vadakkunnathan Temple is a Hindu temple Shiva at the heart of Thrissur city, of Kerala state in India.
The name Thrissur is derived from ‘Thiru-Shiva-Peroor’, which literally translates to “The city of the sacred Shiva”.
Vadakkunnathan temple is surrounded by a massive stone wall enclosing an area of nearly 2km surroundings. Inside this
fortification, there are four gopurams(entrance) indicating the four directions – North, South, East, and West. Apart from
these four gopurams there is a multi-shrined complex in the center with three principal shrines dedicated to Shiva or
Vadakkunnathan, Shankaranarayana, and Rama. Lord Vettekkaran is also magnified within the nalambalam enclosure.
According to popular legend, this is the first temple built by Parasurama, the sixth incarnation of Maha Vishnu.
Tekkinkadu ground, encircling the Vadakkumnathan temple, is the main venue of the Thrissur Pooram. Non-Hindus are
not allowed to enter the temple. Thrissur Pooram is Cultural Capital festivals of in and around the central Kerala
which may stand better than Thrissur pooram in some respect. But the beauty of Thrissur pooram is elanjithara melam
(Pandi Melam) kudamattam,fair works,Chenda melam and pancha vadyam.